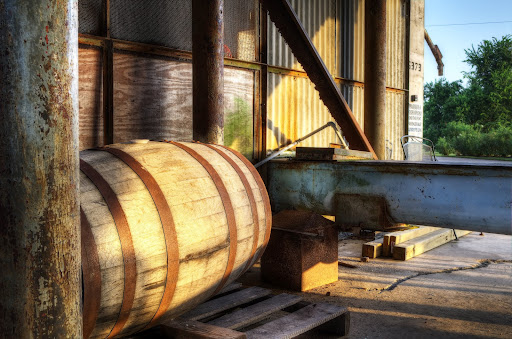 Another photo from the No Label Brewing Company.  This photo is actually of refuse at the end of the walk way in the photo from a few weeks ago, but this stuff is obscured by the silo scaffolding in that photo.  This image is also an HDR, but I went for a warmer and softer look than the other No Label photo.  This one uses the Orton Effect, to add a soft glow to the image.  I described the Orton effect in a post of a photo of the Sabine St. Bridge in Houston.  I love the effect but it only works in certain situations.

After the jump, I'll describe one way (there are many) to implement the Orton Effect using GIMP.


The soft glow of this implementation is most useful for portraits and photos that work with a slightly-out-of-focus, ethereal quality.  I'll often apply the effect and decide that the original, sharper version looks better and chuck the Orton version.  So it's try-it-and-see, but over time you get better at predicting the photos it will work on.  Here's the detailed procedure.  It works in Photoshop too, although the labels of things might be slightly different.