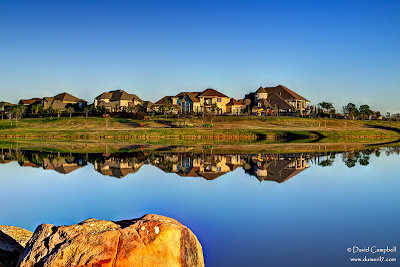 The beginning of this year has been incredibly busy and I just haven't had much time to get out and shoot some photos.  So this weekend I made a point of it, even if it just meant taking some pictures around the neighborhood.  This is a golden hour shot of one of the more affluent sections of my sprawling subdivision.  There was no wind so the reflection off the water is almost perfect.  I halfway expect somebody to think that it a Photoshop reflection, but it isn't.  The sky was cloudless and because it was early, the blue was deep.  I considered cleaning the bird poop off the rock before snapping the photo, but I didn't have anything to clean it with.  Maybe I should have Photoshopped that.
Labels: photography