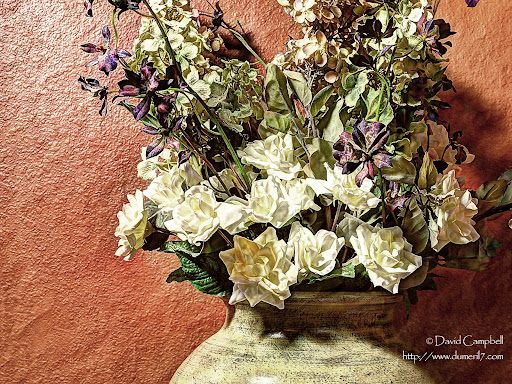 This is one of those experimental/goofing around shots that turned out better than expected and I figured I'd share.  I hadn't taken any pictures for several days and was just wanting to snap a few.  So I went into the dining room and saw this vase and flowers.  I used my poor man's background/hair lighting set up (an $8 portable clamp light fixture and a daylight temperature CFL bulb) mounted on a chair to cast the light down from camera left. The original composition was in portrait orientation and included the entire vase, which was sort of meh.  But when I zoomed into the flowers, I saw the painterly effect from the HDR treatment and said, "wow."  So, I cropped it.  I also added an overlay texture which you can see as sort of plaster-like waves in the wall.

Here's the kicker:  The flowers are not real; they're silks from the craft store.  So, I created a faux-painting effect of fake flowers.  And that's the idea behind the title.  Tyrell is the name of the corporation in Blade Runner that manufactures Replicants ("More Human Than Human").  A fancy-sounding name for a bunch of fake stuff.