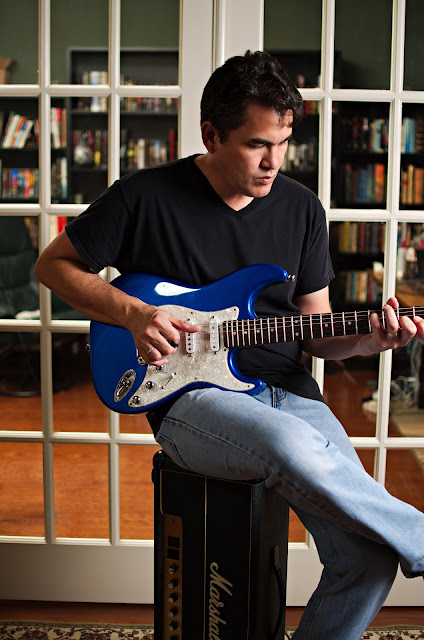 Some more work on portraiture, using myself as the model. The light in the library behind the french doors is a speedlight bounced off the ceiling outside the frame of the photo on the left.  Actually the legs of the light stand could be seen through the french doors, but I GIMPed them out.  I was hoping the library light would also act as a rim light around me, but it didn't do much on that account.  The key light is another speedlight through an umbrella, placed camera upper right.  Then I added a fill light camera at upper-left using my cheapy clamp light and daylight CFL.  This was my second photo using a Nikon SG-3IR.  Only $12 and it's already saved me a lot of time and frustration.  Before, I would frequently forget to cover my camera's built-in flash that I use to optically trigger my off-camera speedlights, and thus screw up the shot with extra head-on lighting.  I'd ruined dozens of photos that way, and it would tie up one hand covering the flash rather than holding the camera steady.  With this Nikon doohickey, it just works and I don't have to think about it.
Labels: photography